Venice V Hotel: the beat of the beach As a European, I’ve always struggled to make sense of LA. Besides a few parks, iconic landmarks, and the natural border of the hills to its north, Los Angeles has always felt endless and sprawling. To my untrained, foreign eye, each district seems to merge into the next. Before you know it, you’re in Pasadena. 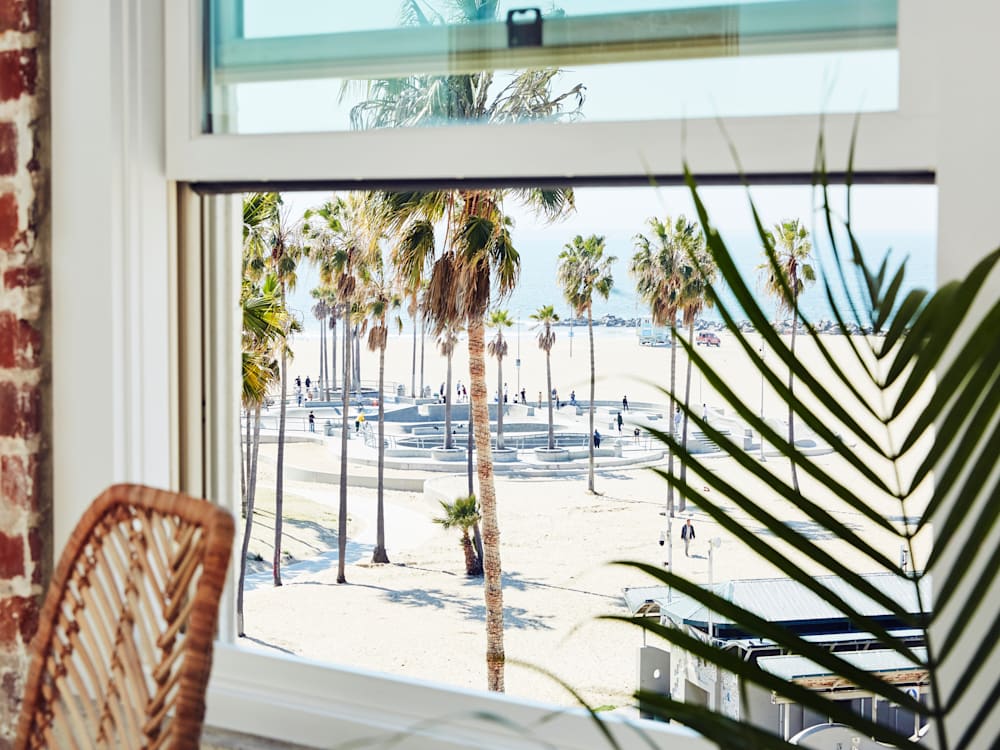 That’s why it was nice to be on the coast this trip. You know where you stand with the coast. Coming from an island, the beachfront is a neighbourhood I’m more familiar with conceptually. With the Pacific on my side, I could walk around with confidence. ‘Have a wander’ as we Brits like to say. Feel like one of the locals.

Venice Beach isn’t the kind of place you want to be looking down at Google Maps on your phone, anyway: it’s a prime people-watching spot. The skater being pulled along by his pitbull. The 80-year-old body-builder who’s definitely skipped leg day for the past decade. The flock of roller-skaters gliding along like flamingos all stuck in my mind from the five-minute walk to Great White from the Venice V Hotel.

As far as locations go, the Venice V is pretty much perfect. Two steps out of the front door and you’re staring at the sand, flirting with the sea breeze, already thinking about which direction feels right to head in. Tough choice, as every direction leads somewhere worth ‘having a wander’ in. 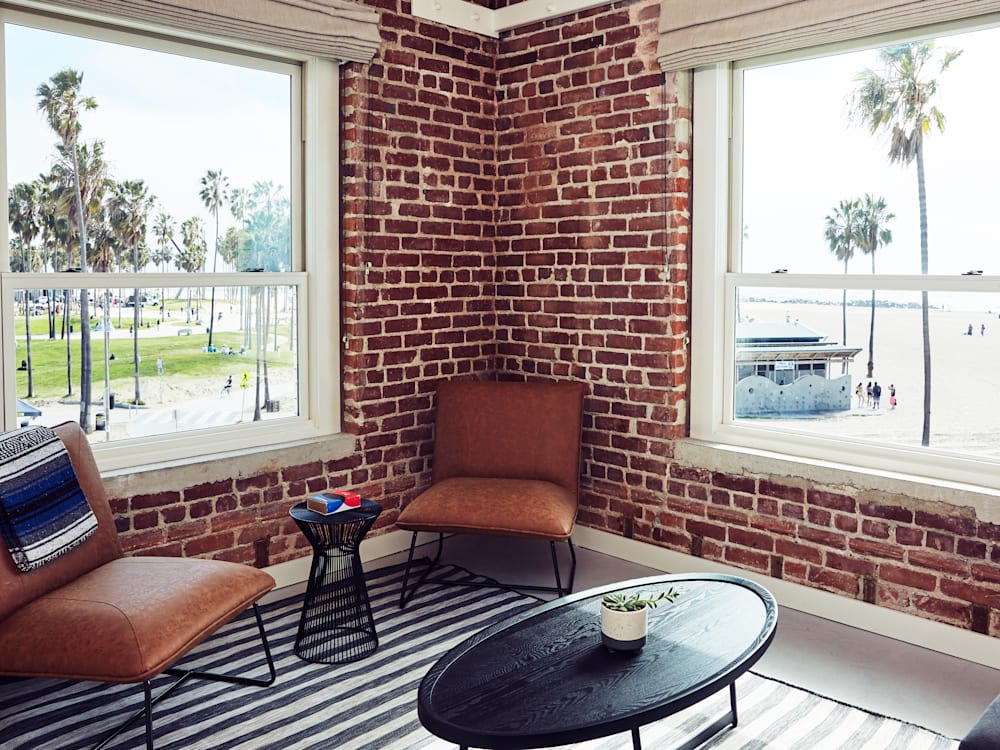 You’ve got Santa Monica to your north, Marina Del Ray to your south, and the ever-so-stylish Abbott Kinney just a few streets inland to your east. And how could I forget the ocean? Head west if you’re keen to get your head in the waves.

I’ve got some pretty great highlights from the few days I spent exploring in all directions. I especially enjoyed the morning run to Santa Monica pier along the beachfront. It’s clearly a sacred time for the true denizens of Venice, the daily joggers and early-bird surfers all out to witness the sun come up over the city.

The slow amble down Abbott Kinney, punctuated by window-shopping, coffee at Butcher’s Daughter, a chess game on the sidewalk (I got hustled and loved every second of it), and brunch at Gjelina was also time very well-spent. 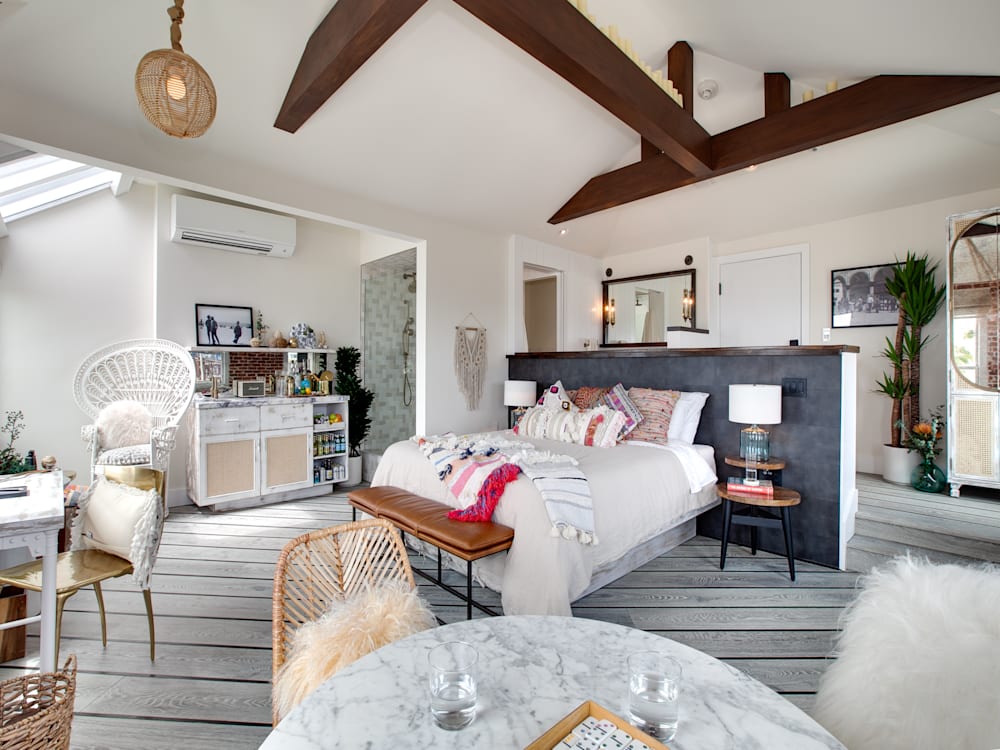 As for the hotel itself, it ticks every box I can think of. The fresh, nostalgic decor pays homage to the culture that Venice Beach has become so famous for and synonymous with. It’s playful and stylish and sets the tone for what to expect on the boardwalk before you’ve even left the room.

Speaking of the room, it was massive. Plenty of space to leave the suitcase open on the floor and not trip over it every time you want to journey around the bed (I’m not one of those ‘unpack’ kinds of travellers). It had a great view of the beach with loads of natural light streaming in, and a desk right by the window to do some work from, or just enjoy people-watching from an even creepier distance (whilst sipping on a complimentary espresso perhaps?).

I should also mention that the bathroom was stocked with Aesop products, which meant each shower I took lasted around 15 per cent longer than usual because their products smell so good they make you want to wash yourself twice. (Worth factoring into the time schedule of your day.) 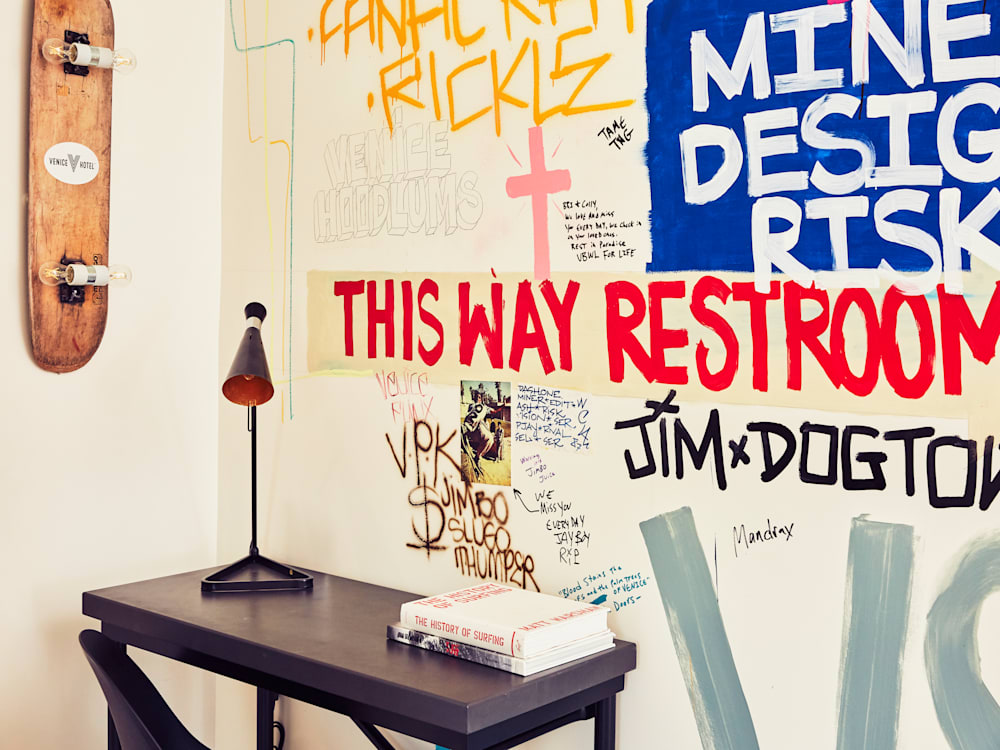 All in all, the Venice V Hotel is an ideal base for a curious few days in Venice. I hadn’t spent much time here before this trip, and truthfully I didn’t really ‘get it’ on previous ventures. When you’re only there for a couple of hours it’s hard to look past the gift shops selling weed tees and cheap bikinis.

But I felt like by staying a couple of nights in a place like this I got to sink into Venice’s rhythm and live like one of the locals for a few days. That’s the kind of experience I most enjoy when I’m travelling, and I think LA is one of those cities that completely changes once you start to notice hidden gems and pockets of gold in the vastness of it all. V v good indeed.

Rhys Lewis is a singer, songwriter and producer originally from Oxfordshire. His second album, Corner Of The Sky, is out on Decca Records on 20 January 2023 and he’ll embark on a UK and EU tour in February.